About I’m a Scientist

I’m a Scientist is like school science lessons meet the X Factor! School students choose which scientist gets a prize of €500 to communicate their work.

Scientists and students talk on this website. They both break down barriers, have fun and learn. But only the students get to vote.

This zone is the Space Zone. It has a range of scientists studying all different topics. Who gets the prize? YOU decide!

The Space Zone is funded by SFI’s Discover Programme and the European Space Education Resource Office (ESERO) Ireland whose programmes and resources range from the CanSat Europe competition to the Careers Portal Space Industry Sector.

In addition, ESERO Ireland support teachers to use the topic of space in the classroom to teach science, technology, engineering and maths (STEM) subjects.

As the author Douglas Adams wrote in The Hitchhikers’ Guide to the Galaxy:

Space is really big. You just won’t believe how vastly, hugely, mindbogglingly big it is. I mean, you may think it’s a long way down the road to the chemist’s, but that’s just peanuts to space.

A long time ago, people thought that the Earth was at the center of everything, that the Sun, planets and stars orbited the Earth, but in the mid 16th century, a German philosopher by the name of Nicolaus Copernicus published a book: De revolutionibus orbium coelestium—in those days everything was written in Latin—in which he set out a new theory. He said that the current theory was wrong; that the sun was at the center, and everything else revolved around it. 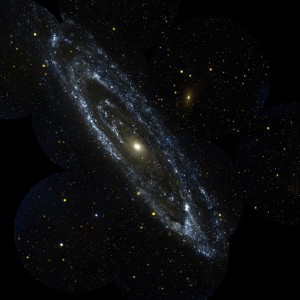 The Andromeda Galaxy is a spiral galaxy about 2.5 million light-years from earth (that’s around 24 million-trillion km). It is the largest neighbor of the Milky Way, and is thought to contain approximately one trillion stars. [Image: Pixabay/Wikiimages]

Today we know the Sun to be the centre of our solar system, just as other stars form the centre of many other solar systems. The Earth and the other planets in our solar system revolve about the Sun. But our sun is on the outskirts of a galaxy called the Milky Way, and the Milky Way is not the only galaxy. The universe is thought to contain something like 100 billion galaxies, and each galaxy might contain something like 100 billion stars.

As the astronomer, Carl Sagan said:

As long as there have been humans, we have searched for our place in the cosmos. Where are we? Who are we? We find that we live on an insignificant planet of a humdrum star, lost in a galaxy, tucked away in some forgotten corner of a universe in which there are far more galaxies than people.

Teachers don't need to book, and students are free to drop in and talk to the scientists.. If they have any burning questions or haven't yet experienced a live chat.